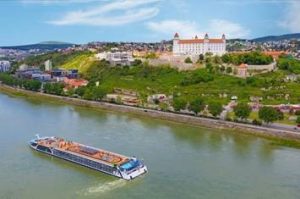 New :15 and :30 second brand spots to air on NBC stations

CALABASAS, CA – (May 17, 2019) – Luxury river cruise line, AmaWaterways, launched its new multi-platform, multi-phased advertising campaign across NBC stations in New York (WNBC), Los Angeles (KNBC) and Miami (WTVJ), this week. For the campaign, AmaWaterways is teaming up with LX.TV and Skycastle, in-house production teams that serve NBC owned television stations, to create customized spots and specialized segments about AmaWaterways’ ships that will showcase the luxury cruise line’s experiential appeal of cruising along the world’s most iconic rivers. In addition to the spots running on-air in these three markets, the content will receive additional distribution through the stations’ digital/mobile platforms. AmaWaterways also will be integrated into NBC Owned Stations Lifestyle programming with a national integration in Open House and a fully devoted episode of nationally distributed 1st Look. In 2020, AmaWaterways will expand its linear/digital advertising campaign to NBC owned stations in Philadelphia, Dallas/Fort Worth and San Diego.

“We are confident that this strategic TV and digital campaign with NBC owned stations will open our product up to a new generation of travelers,” said Janet Bava, chief marketing officer of AmaWaterways. “We are thrilled to answer the call from our travel agency partners who, for many years, have longed for more consumer awareness around river cruising in general and AmaWaterways specifically.”

The spots are narrated by Executive Vice President and Co-Founder of AmaWaterways, Kristin Karst, as she describes the family-owned company’s unique entrepreneurial journey from a one ship start-up to an award-winning river cruise company leading the industry in innovation.

“From the very beginning, our families’ vision was to create a river cruise experience that we ourselves would love. To us, that meant elegantly appointed ships, high quality locally sourced food and wine, a variety of immersive tours and above all, crew who made everyone feel like part of the family,” said Karst. “I am proud to be sharing the AmaWaterways story through our new TV campaign and hope that these very personal ads capture the warm welcome and family spirit for which AmaWaterways is known.”

The first phase of the new AmaWaterways campaign launched on May 13 with spots airing on NBC stations WNBC, KNBC, and WTVJ.  These markets comprise target markets for the company, and a high concentration of past AmaWaterways guests. AmaWaterways’ new spots and longer video segments will air beginning fall 2019. As part of Loyalty Appreciation Month this November, AmaWaterways recently unveiled new Loyalty Cruises with special cruise benefits and recognition for those who have sailed previously with the company. AmaWaterways’ new ads will serve as another component of a marketing program directed at this important audience.

The second phase of the campaign expands to NBC stations in Philadelphia (WCAU), Dallas/Fort Worth (KXAS), and San Diego (KNSD) in 2020, and will include LX.TV/Skycastle-produced spots and customized content for NBC stations’ on-air programs and digital platforms.

A family-owned company celebrating 17 years on the river, AmaWaterways offers unforgettable river cruises with 23 ships sailing Europe’s Danube, Rhine, Moselle, Main, Rhône, Seine, Garonne, Dordogne, Dutch and Belgian Waterways and Douro Rivers, Southeast Asia’s Mekong and Africa’s Chobe River.  Led by experienced river cruise co-founders Rudi Schreiner and Kristin Karst, the company is renowned for its innovative stateroom design featuring unique “twin balconies”; its wellness activities including a wide choice of included shore excursions featuring biking and hiking options for the active traveler; and its award-winning dining—including The Chef’s Table specialty restaurant as well as complimentary fine wine, beer and soft drinks with lunch and dinner. Modern, spacious and tastefully decorated, each ship features onboard amenities such as hair and massage salons and a fitness room, and many have heated outdoor swimming pools with swim-up bars. AmaWaterways leads the river cruise industry in innovation highlighted with the launch of AmaMagna – at twice the width of traditional river ships, this revolutionary ship offers a new dimension in luxury river cruising. The company also offers a variety of themed sailings and brand relationships, with sailings geared towards active travelers and families as well as group and charter options.

With the highest-rated ships in Europe according to the third edition of Berlitz: River Cruising in Europe & the USA, AmaWaterways has received countless honors and accolades including Cruise Critic’s Editor’s Pick Award for “Best for Active Cruisers” and 2018 AFAR Reader’s Choice Award for “Best River Cruise Line.”

NBC Owned Television Stations, part of the NBCUniversal Owned Television Stations division of NBCUniversal, includes 12 local broadcast television stations and a regional news network serving the largest markets in the nation, including New York, Los Angeles, Chicago, Philadelphia, Dallas-Fort Worth, San Francisco Bay Area, Boston, Washington, D.C., Miami-Fort Lauderdale, San Diego and Connecticut, as well as Puerto Rico. The stations produce and broadcast more than 17,000 hours of local news and information programming and enterprise journalism each year that is important and relevant to the communities they serve, delivering it across multiple online, social media and digital out-of-home platforms. The division also operates COZI TV (www.cozitv.com), a national network that brings viewers some of America’s most beloved and iconic television shows and hit movies, as well as the lifestyle production company, LX.TV, and the in-house marketing and promotions company, NBCUniversal Skycastle.