One Team All In: Return of PuroClean’s Annual ConventionCelebrates Post-Pandemic Unity & Successes 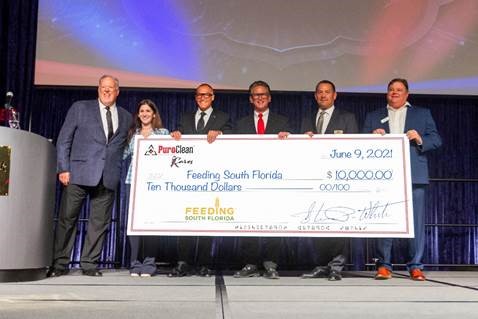 “It is always a privilege to spend time during convention alongside our franchise owners, but this year was even more inspiring to see such outstanding attendance coming out of very challenging times,” said PuroClean Chairman and CEO Mark W. Davis. “Each of our owners and team members play a vital role in contributing to PuroClean’s reputation as a world-class brand, and we are so proud to host them again to celebrate in person, looking ahead to an exciting future.”

The weeklong event began on Monday, June 7, with PuroClean’s annual golf tournament at Grande Oaks Golf Course in Davie, FL. This year’s Convention offered a series of talks by industry and motivational speakers, including a speech by keynote speaker Scott Greenberg, which focused on the strategies behind successful franchise culture. PuroClean Chairman and CEO Mark W. Davis, and President and COO Steve White, delivered a company update, focusing on the growth within the network this past year. The Convention also featured a variety of training sessions by PuroClean’s world-class training team. Most notably was the first-ever Microbial WarriorTM training, a one-of-its-kind intensive industry course coordinated by PuroClean’s Director of Training & Technical Services, Darren Hudema, WLS, teaching franchise owners how to restore property affected by bio-forensic and infectious agents.  PuroClean is the first company globally to roll out this specialized program.

Throughout the week, attendees gathered for networking during a series of cocktail receptions and dinners, mingling with PuroClean partners and vendors during a tradeshow-style expo. An awards dinner honored both long-time and new franchise owners in eight categories. This year’s big three winners — Franchise of the Year, Rookie of the Year, and PuroClean Hot Shot honorees — all recognized franchise owners who came to America to pursue their entrepreneurial aspirations, opening and operating successful PuroClean businesses. Aramsco, PuroClean’s chosen equipment vendor, was named PuroClean’s Strategic Partner of the Year.

Those recognized with awards included:

In keeping with military tradition, PuroClean creates a challenge coin each year for its veteran owners, team members, and visitors. This year, for the first time, a 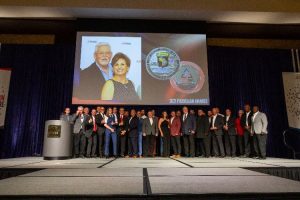 member of the network was featured on the coin.  A special moment came during the awards dinner with the dedication of PuroClean’s 2021 PuroVet Coin to franchise owner Tom Lanyon. Lanyon, a military veteran and longest-running franchise owner in the PuroClean network, was honored following his recent passing, commemorating the impact he left on the franchise community. Lanyon’s family accepted the ‘Tom Lanyon coin’ on his behalf; numerous veteran owners and team members then joined them on stage in a moving moment as they each received their own coin.

PuroClean’s charitable initiatives throughout the convention raised over $15,000 for Feeding South Florida, a branch of the Feeding America network. A check was presented by PuroClean and Vice Mayor Michael Udine of Broward County, Florida, to the non-profit organization during the awards dinner Wednesday evening.  In recognition of PuroClean’s support of military veterans noted earlier in the evening, Feeding South Florida made the surprise announcement that they would deploy all funds raised during Convention to veterans and their families.

“It is exciting to host our international convention right here in South Florida, just minutes from our home office,” said Steve White, President and COO of PuroClean. “This week’s convention really underscored the relentless personal customer service provided by our network in their own hometowns. We were honored to celebrate the team’s achievements this past year while providing groundbreaking training and critical insight to our owners, helping to form their future growth in years ahead.”

PuroClean is one of the leading restoration franchise companies in the nation. Each year, PuroClean performs thousands of jobs throughout the United States and Canada, providing restoration services from common household mishaps to large-scale disasters.

PuroClean provides water damage remediation, flood water removal, fire and smoke damage remediation, mold removal, and biohazard cleanup to commercial and residential customers. Founded in 2001, PuroClean has a comprehensive network of more than 350 franchise offices across North America. PuroClean technicians are thoroughly screened, insured, and trained in utilizing the latest in mitigation technology and procedures, while operating under a strict code of ethics. Each PuroClean office is independently owned and operated. For more information about PuroClean, contact 800-775-7876 or visit www.puroclean.com; for franchise information, visit www.puroclean.com/franchise.