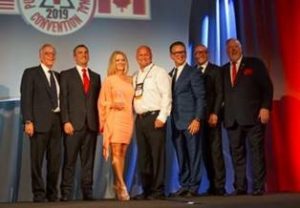 Tamarac, FL (June 7, 2019) – PuroClean, a leading national restoration and remediation franchise, honored several outstanding franchise owners at its international convention held this week at the Detroit Marriott at the Renaissance Center in Detroit, Michigan. Awards presented included Franchise of the Year and Rookie of the Year, among others.

“It is a privilege to spend time during convention alongside our franchise owners as they go through various training sessions and network with each other, executives, support team members, our strategic partners, and vendors,” said Mark W. Davis, Chairman and CEO. “All of our franchise owners play an integral role in helping to make PuroClean a world-class brand and it is rewarding to connect with them, while offering them the support they need to continue to grow their business.”

PuroClean franchise owners who received awards for their efforts this year include:

Eric Jacquez from Tom and Bonnie Lanyon’s Victorville, California office, was awarded Technician of the Year for exceptional service.

PuroClean also recognized Aramsco/Interlink Supply for the fifth consecutive year as its Strategic Partner of the Year for their outstanding support, education, and accessibility. Additionally, Jack Boyd, Executive Vice President of Business Development at PuroClean, was awarded the first-ever Servant Leadership Award for his commitment to the brand, his servant leadership to franchise owners and support team members, and the impact of his industry experience on the company’s business development expansion.

“It is very exciting for us to host our convention in Detroit, so close to the hub of our thriving Canadian business,” said Steve White, President and COO. “We get one week each year to join together to celebrate our brand, our team, and our franchise owners, and Detroit is the perfect place to do so.”

PuroClean has become one of the leading restoration franchise companies in the nation. Each year, PuroClean performs thousands of jobs throughout the United States and Canada, providing restoration services from common household mishaps to large-scale disasters.

Known as the “Paramedics of Property Damage®,” PuroClean provides water damage remediation, flood water removal, fire and smoke damage remediation, mold removal, and biohazard cleanup to commercial and residential customers. Founded in 2001, PuroClean has a comprehensive network of 280-plus franchise offices across North America. PuroClean technicians are thoroughly screened, insured, and trained in utilizing the latest in mitigation technology and procedures, while operating under a strict code of ethics. Each PuroClean office is independently owned and operated. For more information about PuroClean, contact 800-775-7876 or visit www.puroclean.com; for franchise information, visit www.puroclean.com/franchise.