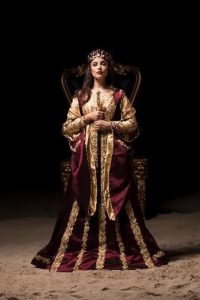 ATLANTA – (NOVEMBER 1, 2018) – It’s the year of the woman and Medieval Times Atlanta is joining in on the celebration, introducing its first-ever femaleled show on November 9.  The live dining and entertainment show, which brings the medieval era to the 21st century, today announced the impending arrival of a Queen in Atlanta, who will serve as the sole ruler of the land with the passing of her father, the previous king.  This is the fourth show to debut at the Atlanta Castle, since its gates opened in 2006 and the first with a female lead.

“Leadership and chivalry know no limitations, and that includes gender,” said William Phillips, general manager of Medieval Times Atlanta. “We are honored to celebrate a strong female lead in this new show and our entire cast, from knights to falcons and horses, are working tirelessly behind-the-scenes to create an authentic medieval experience that entertains, while attaching to a topic that is incredibly timely and inspiring.”

Jousting, fighting, horsemanship, swordplay and a fresh, hot, four-course feast remain central elements of the dinner attraction. With the cast and script change come a series of other significant changes to the show: • More than 700 new costumes for all nine castles’ performers including horses, all of which are custom-designed and hand-made at a dedicated costume shop near Dallas Design District. 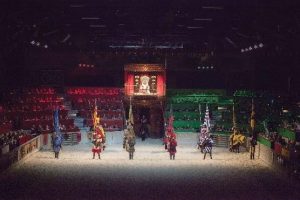 Medieval Times announced the new queen-led show in 2017, marking a major break from a 34-year long tradition of casting a king as the lead role. The show has made its way throughout eight castles in the U.S. and Canada. Atlanta will be its last stop and final hurrah.

For more information or to book your visit to

Medieval Times Dinner & Tournament was founded in 1977 in Spain. It launched in North America in 1983 and has since opened nine castles across the United States and in Toronto, Canada. It has been performed for 65 million guests in its 34 years. For more, visit MedievalTimes.com.